Zivan Holloway Jr. also known by his former recording artist name NuJay, resides in Prince George County, Virginia. Zivan graduated from Prince George High School in 2012 and is continuing his academic journey at Richard Bland College in Petersburg, VA. On December 6, 2014 Zivan premiered his first original Family Drama film, NuJay's Once Upon a Christmas he wrote, directed, produced, and starred in. The film earned him a recognition award from the Prince George Black History Committee of Virginia as an “Emerging Leader” in the community. From then on, Zivan has performed in a couple professional theater plays, starred in a supporting role for an independent horror film called Connected Killer. The film was written, directed, and produced by James Berberich and filmed in Richmond, Va. Holloway was cast in a featured role, Frankie, the son of Frankenstein in an upcoming TV series called Coney Island written, directed, and produced by Tracey Lynn Frame. Other than acting, Holloway is a screenwriter writing different genres such as Drama, Family, Comedy, Fantasy, and Christian preparing to return to directing. He is preparing to direct and produce his original Christian Drama TV Show, Elwood County. On December 2015, he won Achievement in Screenwriting for his short Christian Dramedy screenplay, Elwood County: Recognize at the Hollywood International Moving Pictures Film Festival. Holloway went on to be nominated for an award at the Los Angeles Independent Film Festival Awards and his script has been accepted into one of the biggest screenwriting competitions in Hollywood called Scriptapalooza. Zivan is proud and humble to be a part of the entertainment industry and encourages others to be all they can be as well.

zivanhollowayjr » Audio » All I Want 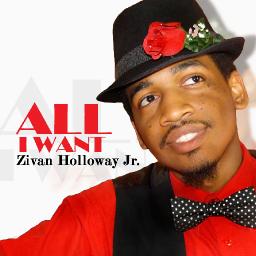