I've been in or around music for as long as I can remember. Started as a child in New Jersey, singing with my family, traveling with my crew in the 80's and continued in the 90's finally recording my first CD in 1995. We sold over 40,000 copies almost literally from the trunk. Done a couple of R&B projects that did very well back in the days but my calling has always been ministry. I ran and ran until I could no longer avoid it. I have been recording Gospel music since 1998 when we formed Prayer Warrior Records, delivering the Word since 2000. I’ve been afforded the opportunity to minister in several countries and states, and to think that God has made a way for this without a major record labels backings, amazes me. I am keeping this STRICTLY MINISTRY. This thing that I am called to do is to be taken seriously. Not a mere performance or entertainment. I’m not knocking those who were called to be Christian entertainers but my calling is much different. We are in a dispensation where one needs more that just to be entertained all of the time because no one normally takes entertainment as something serious. Yes, some songs may be soothing, get you dancing, crying or even laughing but the message is always Jesus. For so long I thought that it was all about me. Now older (Not Old!) and more enlightened, I am on a mission to reach millions, all for HIS glory. I have finished my 4th Gospel CD. It is entitled "Highways and Hedges". I truly believe that it will be used greatly by God to reach many for HIS glory. I've been blessed to have sold many of my past CDs worldwide. I am trusting God to make a way for me to point millions in HIS direction, for HIS glory. The music is said to be different from what the industry has been looking for. That’s why I never expected the industry to be banging on my door. I even had someone say that I and it ministers "TOO MUCH". Imagine that. I have been ministering to the youth and young adults for over 15 years. We have founded Kai Ministries. This ministry carries the name Kai' not to be named after me but for it's definition which in Swahili is Love. It's all about God and God is love. I sing under the name Kai' because I want folks to see love. To feel love and know that it is all about the love of God and not me. I am evidence of HIS LOVE. "Souls over sales" is the motto. The prayer is that the music Ministers and ushers in the Holy Spirit! I wanna see and hear of the lost being converted through this ministry. I wanna see and hear of physical and spiritual healing. I serve a God that not only can do, but a God that will do. I just want to be a useful vessel. The style is said to be contemporary with a traditional feel as quoted by the Missouri Gospel Announcers Guild president, Chuck Spearman. I don't know. All I know is I just want to serve. I'm willing to be put in a vulnerable position in His service. God has ordained it, anointed it and blessed it. I just want to minister to you... Can I? 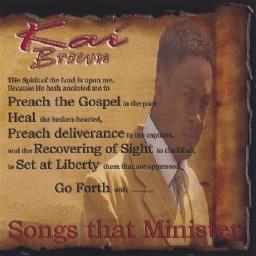