Johann Gutenberg was a German skilled in engraving and metalworking. He and his associates, Peter Schoeffer and Johann Fust, printed the Gutenberg Bible in Germany’s Mainz in 1455. Thus, Gutenberg made the scriptures potentially accessible to every individual. According to some sources, just 48 copies of the Gutenberg Bible are known to have survived, of which 36 are printed on paper and 12 on vellum. To own a piece of history, you can get a facsimile reproduction of the Gutenberg Bible.

The Gutenberg Bible in Latin text is a two-volume work, which was printed in 42-line columns. During the later stages of this Bible’s production, six compositors worked on it simultaneously. Sometimes, the Gutenberg Bible is called the Mazarin Bible, because the first copy that the bibliographers described was located in Cardinal Mazarin’s Paris-based library.

Know All About Wycliffe’s New Testament 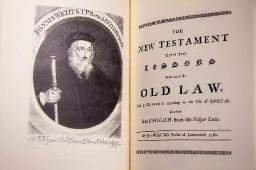 No one should be coerced to learn another language to comprehend God’s Word and experience the Bible’s life-transforming power.  John Wycliffe , an Oxford professor and a leading theologian of his time, believed this. He was among the few individuals who had read the Latin Bible.

Despite being a scholar who lived a life of privilege, he felt a special empathy for the uneducated and the poor. He challenged the Church princes to face their widespread corruption and hypocrisy and repent. He opined the Church was no longer fit to be the keeper of God’s Word.

Wycliffe proposed a truly revolutionary idea of God’s Word being made available to people in both Latin and English so they can read it in the tongue most known to them. He strongly believed that with God’s Word literally in their hands, individuals would be able to work toward their own salvation without needing any...

Buying a rare and antique Bible book needs you to have deep pockets. You should also have adequate knowledge to distinguish between a fake copy and the original, or else, you could be taken for a ride by unscrupulous elements. However, not everyone may have the money to buy the original copy of a  rare Bible  book. In such cases, looking for high-quality facsimiles that reproduce the original content without any changes or deletions is worth considering.

In today’s technology-driven age, many people have moved from physical books to electronic devices for most of their reading. But the scenario is different for rare book collectors and even those who buy facsimiles of the original rare Bible books. For these people, the excitement of holding a piece of literary history remains unparalleled. As a result, there’s a high demand for  rare and antique bibles  and their...

Know All About the Coverdale Bible

William Tyndale’s close friend, Myles Coverdale, translated, compiled, and published the Coverdale Bible in 1535. This was the first printed complete Bible in English. It can be called a ‘translation of a translation’ as it used source texts in Greek and Hebrew, along with translations in Latin and German (including Luther’s Bible).

As Myles Coverdale was the first individual to print an entire Bible in English, he perpetually secured his place in history. If you want to possess this piece of history but can’t get your hands on the original and rare Coverdale Bible , you can try buying a budget-friendly facsimile.

Publication of the Coverdale Bible

After Tyndale’s New Testament was published in numerous editions in the 1520s and 1530s, many people got used to reading or hearing the...

Bible and the Protestant Reformation

The 15th and early 16th centuries were a time of significant intellectual change throughout Europe. This change directly affected the Bible’s availability in the vernacular language to the average reader. A significant 15th-century development was the printing press, which sped both the transmission of ideas and the production of texts. During the early years of printing, the Latin Bible was pretty popular. But after the Gutenberg Bible was printed in Germany’s Mainz around 1455, more than 90 other editions of the Vulgate, including some that had commentary, originated from presses across Europe.

The leaders of the Protestant Reformation aimed to return to a faith and practice that was more aligned with the Bible’s teachings. According to them, allegiance to a church wasn’t necessary to understand God. Instead, they argued that individual study of scripture was needed. This triggered a surge in the creation of new editions of the Bible. These Bibles printed during the...

Please come visit my website for news you will not see on mainstream media on current events national, international and global. https://www.geronimojames.com/

For at least a century, from the late 1880’s until the 1980’s, the time-honored American tradition of having a large “Family Bible” on prominent display in most Christian households was part of our culture as Americans and our heritage as Christians. That big “Family Bible” stood as a silent witness to all that home’s visitors, demonstrating without speaking a word that this home was a Christian Home. Often family records of births, deaths, and marriages were penned into the blank pages at the front or back.

Decline of The Family Bible

Then, in the 1980’s… the economically booming “Reagan Years”, the “Me Decade”… something happened.  That rich tradition of proudly displaying a very large Bible in the Christian Home just fell out of favor.  Sure, we still had the hand-sized Bible that we take to church and back home, which we kept on the nightstand, or on a shelf.  But the unapologetically huge...

Buying a rare copy of an original Bible like the 1611 King James Bible (also called KJV or King James Version) may not be everyone’s cup of tea. However, that doesn’t mean you can’t own a piece of history. You could get a facsimile of the original King James Bible for sale and proudly show it as a valuable addition to your personal library. It could even be a great gift to friends and family, especially the ones who are interested in reading some of the rarest and most unique Bibles.

For more than 400 years, people have loved the KJV or the Authorized Version of the Bible. It stands out for its majestic phrasing and splendid cadences. It won’t be an exaggeration to say that perhaps no other book has so intensely impacted our language as well as our theology.

Thus, it’s not a surprise that there’s a high demand for facsimiles of the original 1611 King...

Why You Should Get a Facsimile of the 1536 Tyndale New Testament, and the 1549 Tyndale Bible For Sale

Before you buy a copy of the original 1536 Tyndale New Testament, and the 1549 Tyndale Bible for sale, it’s important to know what makes it so significant. Usually, the Tyndale Bible stands for William Tyndale’s translations of different books of the Bible in the 1500s. His work is given the credit of being the first English translation from the original Greek and Hebrew texts and the first English, mass-produced biblical translation that became possible due to the new technological advances in the art of printing.

It’s sad to note that before his execution, Tyndale never published a complete Bible. That’s because he could just finish translating the New Testament and around 50% of the Old Testament. Yet, Tyndale’s translations have significantly influenced on almost every contemporary English translation of Scripture.

Since not everyone may have the huge pile of money...

Things You Need to Know Before Buying Old Bibles for Sale

People have diverse reasons to buy old Bibles for sale . For example, an individual may plan to buy an antique King James Version as an heirloom, which will be passed down for generations. Another may like to acquire a Geneva Bible to be given to a loved one as a gift – be it for a wedding anniversary or a birthday. Some may even like to buy ancient Bibles as an investment.

You may even have plans to start your own collection of antique Bibles. Whatever be your reason for buying these old Bibles, you may feel somewhat intimidated by the jargon that antique book dealers use while negotiating a deal.

Given below is an overview of the technical terms the antiquarian book trade involves, which will help you navigate this world with relative ease and better understand the different factors contributing to the price of old Bibles...