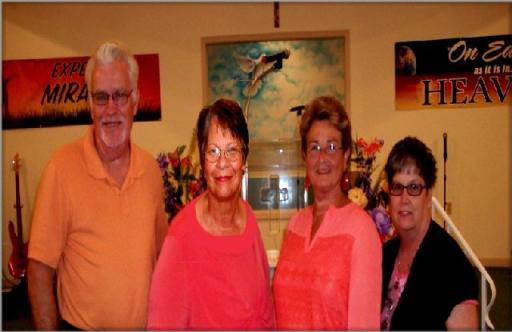 Yea, they shall sing in the ways of the Lord: For great is the Glory of the Lord ~Psalm 138-5~ 4 His Glory is a singing ministry called out for the cause of JESUS CHRIST. Our heart's desire is to uplift Jesus before men and women. And I, if I be lifted up from the earth, will draw all men unto me. (John 12:32) We also want to see saints blessed and encouraged to have a closer walk with God and to help lead souls to a saving knowledge of Jesus Christ. 4 His Glory sings a mixture of inspirational, original music, traditional hymns, praise and worship, while sharing our testimonies.

We give all the praise, glory & honor to JESUS CHRIST.

Jesus is God's only begotten Son, yet He came from the throne of His Father to the womb of a woman. He became Son of Man that we might become sons of God.

He was conceived by the Holy Spirit, and born of a virgin. He lived in poverty, and was unknown outside of Nazareth. He had neither wealth nor influence.

Who is Jesus Christ? Miraculous Ministry
History has never known such as He. In infancy, He startled a king. As a boy, He stunned the theologians with His knowledge and wisdom, for His knowledge was directly from God.

In manhood, He ruled the elements and quieted the raging sea. He healed without medicine, and fed thousands from a boy's lunch. Even demons obeyed Him and He gave back life to those who were dead.

Yet He suffered and sustained in body and soul the anger of God against the sin of the whole human race. He was despised and rejected of men. Though He was innocent, He was condemned by a civil judge and sentenced to death on a cross.

Who is Jesus Christ? Life-changing Impact
By His suffering and death, He paid completely for the sins of all who believe in Him. He set us free from the certain judgment and eternal condemnation of God that was to fall on all of us.

Some have given their lives for others, and great men have come and gone, yet Jesus Christ lives on. Herod could not kill Him. Satan could not stop him. Death could not destroy Him. The grave could not hold Him. Having fully satisfied God's perfect justice, He conquered death and rose on the third day as He said He would.

Who is Jesus Christ Really?
For the last 2,000 years, every man, woman and child has been confronted with this same question. In Mathew 16:15, Jesus put it this way, 'But who do you say that I am?' One of His disciples, Simon Peter, replied: 'You are the Christ, the Son of the living God.' Now it's your turn. Who do you say that He is?