Alpha 7 Ministries was founded as a “WORLDWIDE MINISTRY BEYOND & INSIDE THE WALLS” by Randall & DeBorrah K. Ogans. We are committed to helping individuals, couples, families, congregations and GOD’S Universal Church of Believers of ALL colors, races & denominations ALL over the world. We are here to encourage & help ALL who are interested, to develop and/or strengthen their ongoing relationship with our Lord & Savior Jesus Christ. Our Counseling Ministry There are times when we all need some encouragement in our walk with the Lord. Our counseling ministry was designed to encourage commitment and repentance. To motivate and uplift you up to our Lord in your journey. If you’re facing some personal dilemmas review the many articles where our resident Creation Therapist DeBorrah K. Ogans tackles some of the most difficult problems facing Christians today. Our Music Ministry Music speaks in a universal language a message that reaches beyond physical, emotional, and spiritual walls. The message in our music is that Jesus Christ is Lord, and He is worthy to be praised. We have recorded artists that are sending that message to the young and the old, crossing all cultural boundaries. There is something for every Christian’s musical taste: Contemporary Christian, Gospel, Praise and Worship, Quartet, Instrumental Gospel/Jazz, and Easy Listening. ~ Everyday: “To GOD Be The GLORY!”

We Need To Pray 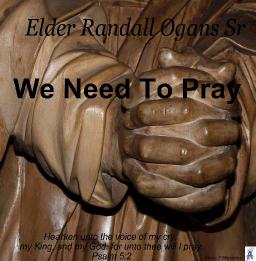 
Elder Randall Ogans Sr. is no stranger to the gospel music industry. Born in the San Francisco Bay Area, the 6th of 9 children, he accepted Jesus Christ as his personal savior at the age of seven, and has continuously been active in the Church in a multiplicity of capacities ever since, never leaving. His parents never failed to take him to the House of Prayer.

At the age of 10 he began studying and playing the piano and the Hammond B-3 organ. At the age of 13, he began playing for church choirs throughout the Bay Area. He was trained in classical music, but was gifted to play gospel music, and to share the Word of God thru speaking, preaching, and through his music.

His favorite scripture is: “Let the word of Christ dwell in you richly in all wisdom; teaching and admonishing one another in psalms and hymns and spiritual songs, singing with grace in your hearts to the Lord.” Colossians 3:16 This scripture provides the context for what he focuses on when ministering in music.

Elder Randall Ogans is married to Elder DeBorrah K. Ogans. They both are ordained ministers. In 1995 they founded Alpha 7 Ministries, and were the executive producers of the recordings of several gospel artists, including: Debra Henderson, Brenda Lowe, The Sons of the Soul Revivers, Jus-B-Cuz, and Pastor Fleetwood Irving.

Having been fortunate enough to travel and tour Europe, he has experienced the freedom in Christ, and realization that “the earth is the LORD's, and the fulness thereof; the world, and they that dwell therein.” Psalm 24. His travels have taken him to Greece where he has climbed Mars Hill, spoken of in the book of Acts. This is where the apostle Paul said “It is in Him that we live, move, and have our being”. He has also traveled to France, Spain, Italy, England, Turkey(Ephesus), and Switzerland where he ministered doing concerts playing pipe organs from the 18th century, in some of the great cathedrals throughout that country. Being able to engage with a diversity of people, cultures, and ages all over the world provided a global perspective of God’s true universal Church. These experiences have provided a deepened inspiration for his music.

Now comes Elder Randall Ogans’ first recording entitled “We Need To Pray”. An inspirational message set to melodic background music, this recording will cause one to reflect on life experiences, the state of our world, and provide encouragement to Christians to stand on God’s principles and promises. It will also encourage and inspire the unsaved.

This inspirational message put to song, provides many reasons as to for “what”, and “why” We Need To Pray.

We Need To Pray is available at CdBaby.