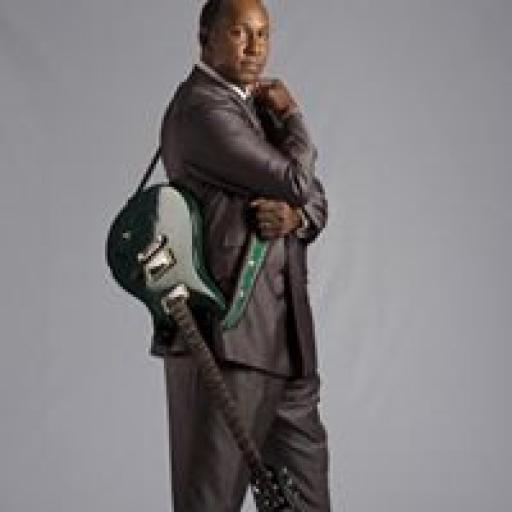 In 2014, Arthur Roland was inducted into the Gospel Music Hall of Fame as a member of Lucille Pope and the Pearly Gates. He has been playing and touring for 35 years as a professional gospel artist. He is among the first Gospel groups to record and chart on a White Southern Gospel Music label (Morningstar Records). The 2009 album was entitled " It's all Good." He has also worked hits for artists like the Williams Brothers (God will Deliver), Slim and the Supreme Angels (Separated Right from Wrong), and Lucille Pope and Pearly Gates (Real Christians Stand up; Great Reunion) to name a few. Roland has played and sung on countless other works with artists like the Blind Boys of Alabama, Dorothy Norwood and many others. In 2004, he toured Switzerland and other Countries on " The tribute to Mahalia Jackson tour." He released his first solo project in 2014, " Revival on a Tour Bus," on the Tate Music Group Label, which earned him his first multi-selling platinum and is still a top seller in Southern Gospel. His sophomore album, " Stepping Out Of Myself,” is slated for release in November 2015. This album is the first project ever to be written produced and sung mostly by Roland, and launched the startup of his own record label. That was always a dream after moving to St Louis, Mo. in 2009 and now back home in Georgia in 2015. When you accept salvation at the early age of six years old and grow up in Bostwick, an Eastern Georgia town with fewer than 400 people, you learn to listen and sometimes you even dream of a world bigger than the one that you were born in. It was at his family’s church, Mt. Vernon Baptist, that he first heard the music of the Old Negro Spirituals sung and grew to love them. But when his parents took him to his first Gospel show and he heard legends like the Gospel Keynotes, the Mighty Clouds of Joy, and the Williams Brothers a chord ran through his body when he heard the guitars and the drums playing. He was so fascinated by the Gospel quartet sound that he went home and formed a group with his sisters. They copied the sounds and crafted it into their own. They became a children’s quartet that traveled and even recorded. One night the young Arthur had a very clear dream that they were performing on a huge stage and he was doing something that he had never done before – he was playing the guitar! When he woke up from that dream he was gifted by God with the ability to play the guitar just as he had in the dream. He recognized it as a gift from God.

From these humble beginnings, Roland has spent 35 years of his life touring, singing, playing, and writing music for some of those same artists that he saw when he walked into that Gospel concert at six years old. He has been amazingly blessed to learn side-by-side from legends like Clarence Fountain and the Blind Boys of Alabama, Lucille Pope, the late Willie Johnson, and Joe Ligon of the Mighty Clouds of Joy. These talented Gospel greats taught him the history and integrity of this style of music and sharpened his skills as a performer, writer, and singer. He also learned the history of the blues, which emanated from the church, and infused it into his traditional but unique Gospel style.

In addition to this professional Gospel music career, Roland gives his time, his voice, and musical platform to the community and to speak on racial intolerance and human injustice. He has chaired the foundation "Urban Future," a St. Louis organization that helps inner city youth focus on school musical dreams and college goals. He co-produced and donated his musical talent to " The Restoration Project" with five of St. Louis’ top blues artist. Thousands of dollars were raised for the foundation’s cd project.

For the past two years, Roland has also spoken in Florida with Jamie Foxx and other noted celebrities after the Trayvon Martin incident and was at Ground Zero in Ferguson, MO. As a resident of St. Louis he, along with other St Louis leaders and known personalities, pleaded for calmer heads after the violence erupted. “Stepping Out Of Myself,” his new cd project, is dedicated in remembrance of the Michael Brown incident with songs like Tryna Get Ready and Refuge . These songs were inspired and came about after being in the middle of, talking to, and hearing and seeing the faces of the people at Ground Zero. Roland said, “I pray that it honors their words, their pain, and their grief as well as the hurt caused by continuing racial intolerance.”


That's a fantastic career and a life well lived. It's really nice to see a journey of this nature and to hear the results of learning alongside legends.