I'll Start the Conversation for this New group.... 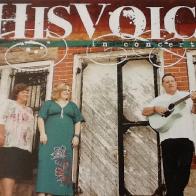 I'll start the ball rolling for new discussion in this new group. HisVoice just wants to share how great God has been to us in the past few weeks & months . We've been blessed to have gone into many new venues, churches & areas we've never had the opportunity to work in before, and made tons of new friends along the way. Even greater, has been the Realness & Power of God's Spirit - The Outpouring has been Tremendous, and folks have been obedient to His Spirit.

We've been Blessed to see Folks accepting The Lord Jesus as their Savior, others coming to altars of repentance,...others seeking wisdom, grace, direction in their situations, marriages...others for Physical & Spiritual Healing. God has Definitely Been on The Scene !!

The Service that sticks out in our mind, though,...is the one where a 27 Yr.Old Young Man came weeping down the aisle, knelt down at the Altar, and began to cry out The Father. He Prayed for Several Minutes, ...weeping & asking for God's Help and Forgiveness. When He stood up, he immediately began Praising God for His Mercies, and headed back to His seat....then when the young man reached His seat, he came back to the altar, and laid down his Cigarettes and a Lighter....He testified that the Convicting Power of The Holy Spirit, had told Him that His Smoking Habit was hindering his Prayer life & His Christian walk & Testimony, and God said to .."Lay "em Down"...so Brothers & Sisters....HE DID !!

Now some may think this is Silly,.. we tend to think that this is a Great Example of being Obedient to The Holy Spirit. I pray that ALL of US could get self, problems, image, etc out of the way...and be MORE OBEDIENT to HIS Spirit !!

I Pray that each Person, Group, Ministry, Etc, can ALL Experience these kind of Services & Give God ALL the Glory,...FOR HE IS WORTHY !!!!!!!