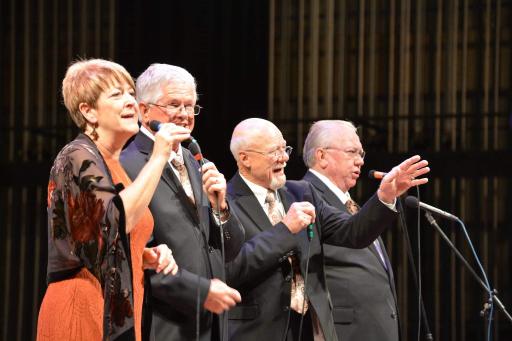 The 5 men in this group began singing Southern Gospel in 1971 and sang and recorded together until 1982 as The Kingdom Heirs. Along the way they married and had children. Travelling and singing from Detroit to Jacksonville and everywhere in between east of the Mississippi River. We’re in concert with many of the full time SG groups like The Henson’s, Kingsmen, Cathedrals, Chuck Wagon Gang, Hemphills, Jerry Goff, Wendy Bagwell, Nelons, The Singing Cooks, McKameys, The Primitives and many more. They established Southern Gospel in Silver Dollar City in Pigeon Forge, TN years before it became Dollywood. In 1982 Lead Vocal withdrew from The Kingdom Heirs to help raise his children and several more followed suite. Now after years of leading choir and going to church with family they came back together in 2011 and formed Knoxville’s Own SGQ, Now singing a limited schedule and sharing the gospel in song watch for them in a church or concert near you.