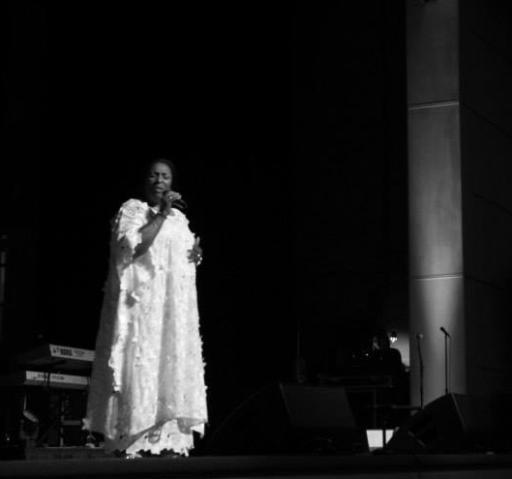 Shirley Simpson was born in Mt. Granby in St. John's, Grenada. She was the second of eight children born to Evadney Ross and Joseph Nickels. Her talent and passion for music was realized while in grade school when she began singing in the morning assembly and school courtyard, stunning her teachers and classmates. A graduate of St. Rose Convent Secondary School, Shirley continued to nurture her talent singing at school assemblies and pageants. In 1981, Shirley migrated to Canada and began performing with the Johnny Christie band. However, inspired by a visit to church, Shirley made the life changing decision to serve the Lord. On a cold winter day, Shirley heard a whisper in her ear. It was a sound and the lyrics of Gethsemane. She started to to what had come to her and ran home to consult her pastor on the meaning of what she had experienced. Hearing that this was the garden where Jesus prayed, Shirley got help with the next two verses of the song and saved it. Five years after having received the song from God almighty, Shirley recorded it so that it opened every door possible for her by radio and through the television show, 100 Huntley Street. Shirley is known as Toronto's "Black Country Singer." Her voice is a sweet breath of fresh air. She is warm, kind loving and has a big heart for God's people.


God has blessed you with country singing at it's finest Shirley.


Shirley Simpson's NEW SINGLE now available on all your favorite music download sites
including iTunes, Google Play Music and many more!
www.shirleysimpson.com
Shirley is known as Toronto's "Black Country Singer." Her voice is a sweet breath of fresh air. She is a Pastor, an ambassador and a warm, kind loving person with a big heart for God's people.