Grieve not the holy Spirit of God 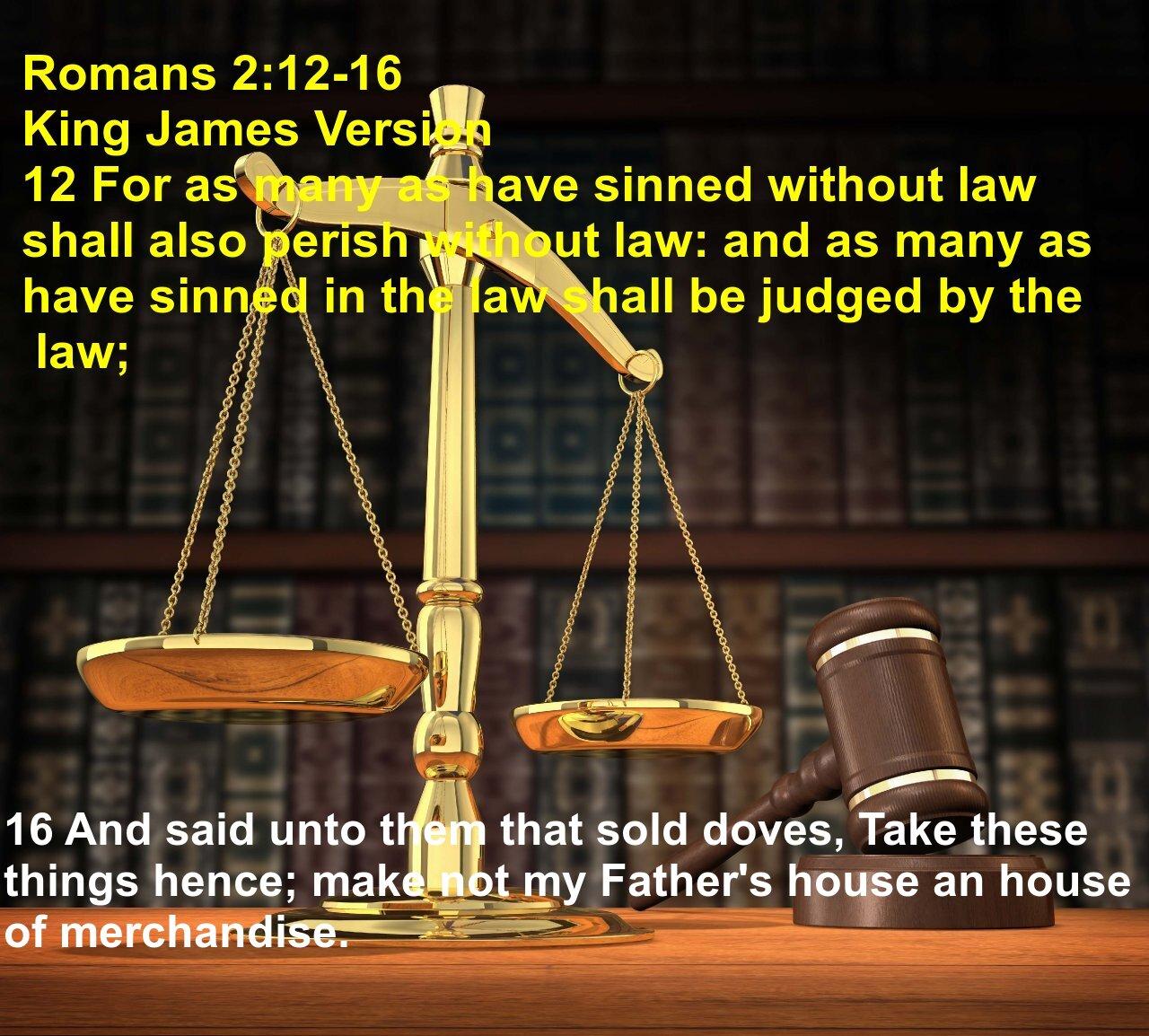 Remember you're supposed to stand up and pick up your cross daily or you're not worthy of him. Recently I remembered that he said if you love mother or sister or brother more than me you are not worthy of me. I wonder why? And you can't claim Grace and not works because this is not referring to Salvation.

Grieve not the holy Spirit of God

Looking up tongues and what it means when the Bible is speaking about different tonques. Sometimes it speaking about languages and sometimes the gift of tongues.

Look up in the book of Revelation whom is the multitude that will be saved of all people & nations.

Revelation 7:9, KJV: After this I beheld, and, lo, a great multitude, which no man could number, of all nations, and kindreds, and people, and tongues, stood before the throne, and before the Lamb, clothed with white robes, and palms in their hands;

There is talk about the 144,000 sealed Jews which I believe are the Jewish tribes. This verse as they think is a multitude minus ethnic discrimination. It means people will be saved from all different ethnic backgrounds and languages. And they cross reference this verse with other references in the Book of Revelation. Read this reference link

"They show when the passage is taken in context ( Luke 22:36-38 ), Jesus is also aware of fulfilling prophecy and makes a surprising statement that two swords are "enough." He said to them, “But now if you have a purse, take it, and also a bag; and if you don't have a sword, sell your cloak and buy one."

"— Gospel of Luke 22:36-38, NIV. Ellul, Yoder and Archie Penner claim that two swords could not possibly have been "enough" to defend Jesus from his pending arrest, trial and execution, so their sole purpose must have been Jesus' wish to fulfill a prophecy (Isaiah 53:9-12)."

A few things to clear up. First of all we are not saved by works but with my long in-depth studies the day of judgment when many are castaway because he does not know them being Christ it is for lawlessness. It is for iniquity. As I said before it appears these people we're Christians because they were casting out demons. I haven't heard of what you would call counterfeit Christians casting out demons. I never seen it. Could they have been true Christians that's fell away? Then I heard some Church preachers tell their audience/followers that people are teaching works. No it's not works because we're not saved by works. It makes me wonder about the multitude of Christians and their walk with the Lord. Sometimes people need individual prayer but really individual teaching, love and correction. Edifying is the word. It's hard to get it when you have a huge group and a certain preacher is sort of assessing the whole thing under the same umbrella. I know a good preacher who has the ability to feed the sheep properly. No wonder scripture says they will inherit a stricter judgement. Jesus said if you love me keep my Commandments. He also said in the Sermon on the Mount be perfect as your father in Heaven is perfect. Scripture also tells us that the man who is Holy keep being holy and the man that isn't keep being likewise. I remind you John 10:10 he came to give you an abundance of life. That shows him you love him and it doesn't always talk about your salvation. Those who break Commandments will be called the least in the Kingdom if they make it at all .

And Christians even being born again are not perfect. And yes the Holy Ghost works with people. Not all have the same will for their lives or the same calling. People have different gifts too. Some Christians evangelize the word of God. Others do missionary work. Yet others probably build churches. And yet others might be in administration or run some musical choir. Some are called to different functions. I am sure for example the street preaching from the 1st and 2nd Century is not going to be exactly the same as what they have today. It's not just technology that changed. It was probably just as hard back then. And it's one thing to be bold when a person is out there doing that but it's another thing to be arrogant and prideful. To condemn everyone else who doesn't conform to your methods doesn't appear proper. Christ said to love each other and I will remind you that Christians are famous for being hypocrites. We like to point at others just like the Pharisees were hypocrites but we too have many Christians whom are the same.

I seen a video of a Street Preacher that had a vile very Wicked person screaming obscenities really badly. What the street did was rebuke him. And he tried to work with the situation while the guy was getting hot headed. It was so bad taking God's name in vain and holy things in vain that it was just too long on camera. Imagine how many people are going to see that. This is insulting the Holy Ghost. Next time I'm not going to comment on their videos. It's worse than any I've seen before. There is something to learn in Street Preachers videos outing but I feel this was just horrendous. There has to be a better way to deal with this type of situation. I'm appalled that I even looked at it. Shocking Society of evildoers it's what we have today. As apostle Peter called them brute beasts.

The other thing is if a particular Christian does not want to celebrate certain holidays that's their right. Just because somebody might want to keep the Sabbath for example and others don't that's their decision and that doesn't make them less a Christian than you. You see the greatest Hypocrites on the day of judgment are Christians themselves. Judgment starts at the house of God.

Some scriptures are referring to tongues as the native languages. You know Greek, Hebrew, English and other languages but sometimes it is referring to the gift of tongues. So we have to be careful where they show up in scripture.

"The biblical account of Pentecost in the second chapter of the book of Acts describes the sound of a mighty rushing wind and "divided tongues like fire" coming to rest on the apostles. The text further describes that "they were all filled with the Holy Spirit, and began to speak in other languages".

“How hear we every man in our language wherein we were born?” (verse 11). The gift of tongues is the miraculous ability to speak in a foreign language. According to Acts 10, the household of Cornelius spoke in tongues when the Holy Spirit came upon them.Dec 10, 2016

Here is an example of the word tongue used in a different meaning.

“The Lord GOD hath given me the tongue of the learned, that I should know how to speak a word in season to him that is weary: he wakeneth morning by morning, he wakeneth mine ear to hear as the learned.”

11 And the whole earth was of one language, and of one speech.

9 After this I beheld, and, lo, a great multitude, which no man could number, of all nations, and kindreds, and people, and tongues, stood before the throne, and before the Lamb, clothed with white robes, and palms in their hands;

10 And cried with a loud voice, saying, Salvation to our God which sitteth upon the throne, and unto the Lamb.

Revelation 7:9 makes it clear that it's a multitude of people from all Nations and kindreds and people and tongues. It's not talking about all of these nations and people speaking in the gift of tongues. They're different languages. They were all before the lamb in their white robes with palms in their hands. So people will be saved from all different nations. Salvation is of the Lord. So give the Lord thanks and praise and he always says have faith.

Praise the Lord for the gospel for I am not ashamed of the Gospel. Amen

I heard about all the protesting going on over this court issue in the United States. Their protesting by the judges personal homes and even by the court building that they fenced off. I did notice one Street Preacher that took the opportunity to preach but I did see in his video it wasn't too easy. But at least he tried. I heard they want to have a candle vigil. There are those that are saying hands off my body. They are protesting for sin. (Rebellion) Aborting your baby is murder and it's no doubt that this is the evil generation referred to in the end days as they would be Lawless just like in the day of Noah. I like to remind you that the United States is not the only nation that has these issues. As a Christian even though I'm forgiven it tells me how stupid I was in my younger years that I didn't know and that I was reaping evil and doing evil following the world. I would prefer to have a God-fearing woman. Men are just as guilty because they chase such women. And these things could even happen to a woman that was raised with good morals. Temptation is a beast. Pray that you are counted worthy as written in Scripture .

Edify... Edify... I could understand the other great gift and Christian excitement being caught up in the air with the Lord as written in scripture which they refer to as the rapture. They can't wait to be raptured. I could understand the excitement. No one knows when it will happen. Christ said not even the angels in heaven know but only the father. Right now we're living at a time when things are reported that there are tensions of perplexity between the Nations. We know from scripture there is going to be an Armageddon. Still as Christians people should be praying for peace and calm. People should be preaching peace and promoting peace.

The reporting within 1/2 an hour that I seen that would be the consequences of nuclear weapons is not good news. Pray Christians.