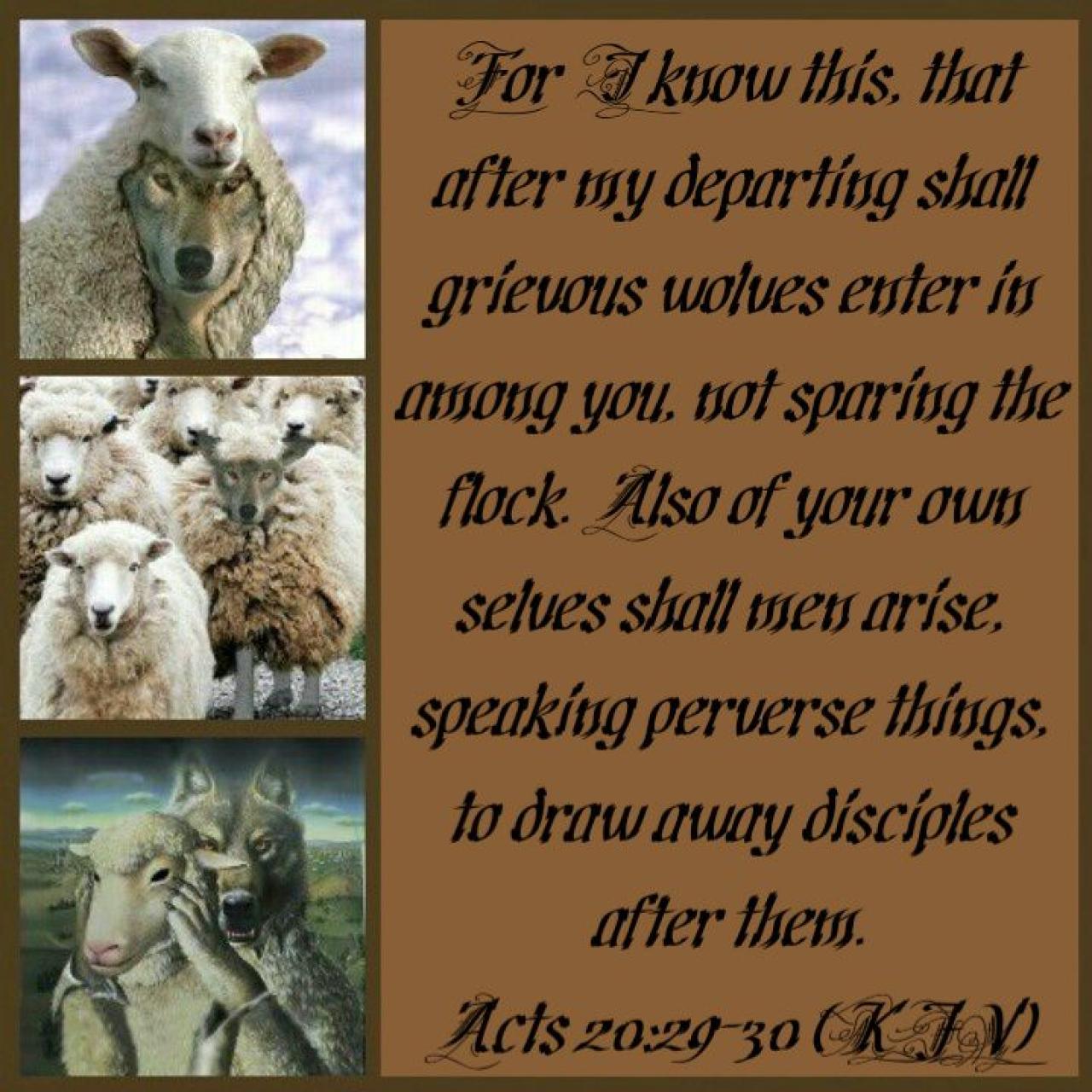 29 For I know this, that after my departing shall grievous wolves enter in among you, not sparing the flock.

I have some things to talk about that are important. First of all trying to reach the deceived because many are older generation that believe lies and are embedded in religiosity instead of relationship is frustrating and they are wicked. They follow a gospel that no angel in heaven ever preached. And they live not according to scripture because I have known many of them. So what happened? Why is this so? The Bible tells us that God gave many people over to a reprobate mind because they are in darkness and resist truth. Wolves deceived them. But moreover God in prayer and in my heart reveals additionally what really happened is they have made the house of God into a den of thieves. John 2:16 People are following religion instead of relationship and a false way of salvation because they are being taught by those who are deceived themselves mostly. What is intriguing is such people can even be older people and you can see their fruits where before when you were deceived you were blind to it and you just shrugged it off. You also have understanding of the trickery of the evil one. Where you were blind before it's God who has made you see. 3:44 June 12th 2022

So in conjunction of mind regarding what I discussed above I came across a man who was not a believer and he talked about all these false prophets and the gap years before Christ and I did try to reach him by his heart. So I looked into some of the things that he has said...

What happened to 400 years before Christ?

It is roughly contiguous with the Second Temple period (516 BC-70 AD) and encompasses the age of Hellenistic Judaism. It is known by some members of the Protestant community as the "400 Silent Years" because it was a span where no new prophets were raised and God revealed nothing new to the Jewish people.

There is controversy about this day the Bible says the seven day is to be kept holy. I understand that the apostles met on the first day of the week. But they also probably kept the Sabbath.

The Lord's Day in Christianity is generally Sunday, the principal day of communal worship. It is observed by most Christians as the weekly memorial of the resurrection of Jesus Christ, who is said in the canonical Gospels to have been witnessed alive from the dead early on the first day of the week.

So there were 400 years before Christ that seem to be unaccounted for and there were no new prophets revealing prophecy to the Jewish people and people have a problem with this. There is also no account of years for Christ ( The Missing Years ) people also try to fill in the gaps.

It is known by some members of the Protestant community as the "400 Silent Years" because it was a span where no new prophets were raised and God revealed nothing new to the Jewish people.

What happened in the 400 years between Old and New Testament?

The 400-year period between the Old Testament and New Testament is called the Intertestamental Period about which we know a great deal from extra-biblical sources. This period was violent, with many upheavals that affected religious beliefs. Jan 29, 2016

When was the book of Isaiah written before Jesus?

The prophecies of First Isaiah. First Isaiah contains the words and prophecies of Isaiah, a most important 8th-century bce prophet of Judah, written either by himself or his contemporary followers in Jerusalem (from c. 740 to 700 bce), along with some later additions, such as chapters 24–27 and 33–39.

How many years was it from Malachi to Jesus?

Four hundred years. :Between Malachi and Matthew, four hundred years passed in the Holy Land for which we have no prophetic record. Much happened during this period that affects our understanding of the New Testament, so it is important to be familiar with at least the major events that occurred in this intertestamental period.