Hell opens her mouth without measure 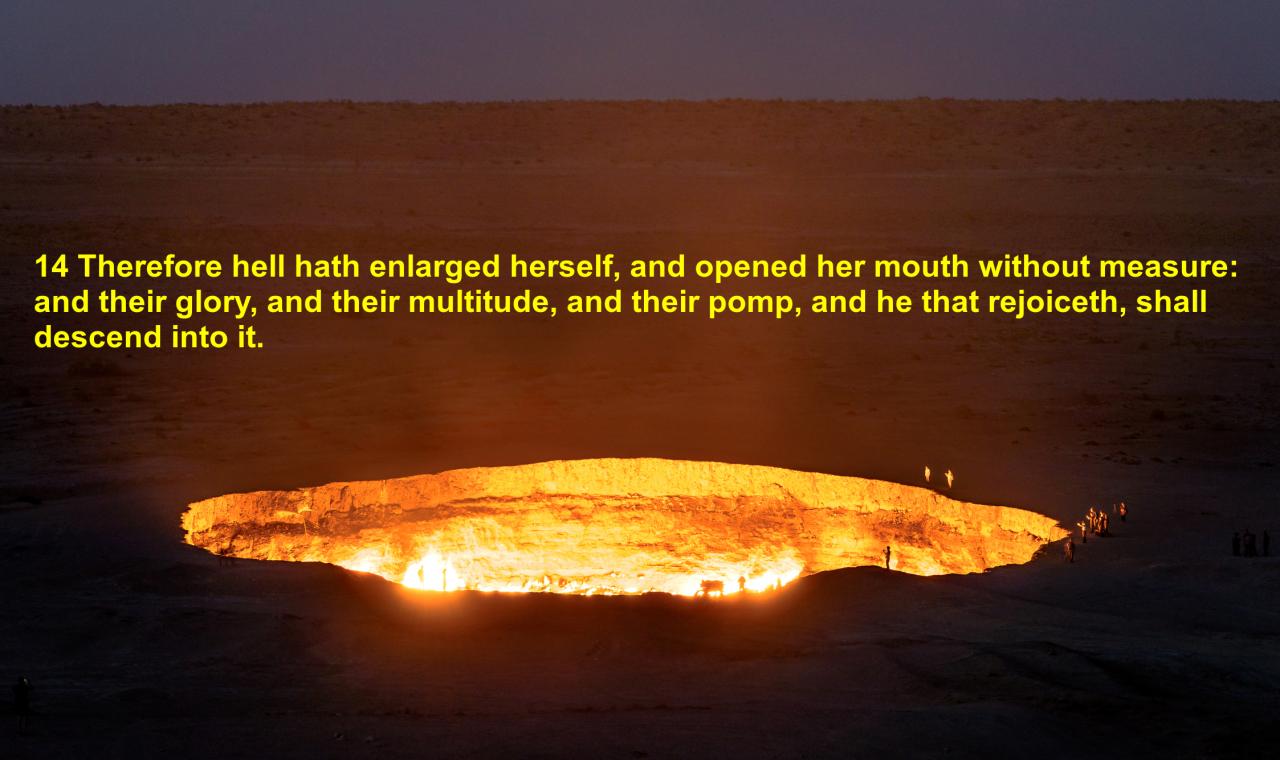 Hell opens her mouth without measure

Everyday people take for granted their own lives around the world. I read people's perception of God. There are those that are lost in the world and they argue that religion suppresses them and pushes its values on them. First off God is not religion God is a relationship but reprobates those deprived minds which is like a blown fuse to God is already cut off. John 14:23 . 23 Jesus answered and said unto him, If a man love me, he will keep my words: and my Father will love him, and we will come unto him, and make our abode with him.

God tells us that it is sin to not believe in him. When they knew God they didn't glorify God as God. Romans 1:21 Instead they looked to/at creepy things and things such as images and statues and associated them with God and created many false gods. “Because that, when they knew God, they glorified  him  not as God, neither were thankful; but became vain in their imaginations, and their foolish heart was darkened Romans 1:21

If you read the Bible and I suggest you read the King James Bible it will tell you who the son has set free is free indeed. John 8:36 That means that the son of the living God if he opens your mind, your eyes and your heart then you will be without doubt and you will be astonished but also perplexed at the evil and the deception in this world. 12  For we wrestle not against flesh and blood, but against principalities, against powers, against the rulers of the darkness of this world, against spiritual wickedness in high places.. Ephesians 6:12 The truth is they oppose everything called God and  prop up other gods. They have turned God into a business and into religion that actually stifles you. John 2:16 God has sent his only begotten son in the world not to condemn it but to save it because when he originally created it he said it was good. God also warns people to fear him because hell is eternal and it exists. The people ending up there is like a tap (water) that is slowly dripping and the dripping becomes solid water. The prophet Isaiah said that it enlarges itself. Compared to the multitudes that live and die every year around the world very few people make it to eternal life. The wages of sin is death and that means you die the second death. Jesus said what will the profit a man to gain the whole world and perish. He also said that a man who tries to preserve this life will lose it and also lose the next life.

God tells us that your temple is to be holy and you are to offer it as a holy sacrifice. No fornication. When you smoke or take drugs, drink alcohol you are destroying the body God gave you and are directly in rebellion to him and his spiritual laws especially when you use your mouth to insult people or for profanity or otherwise.

God tells us in the Bible being his word that many people are destroyed for lack of understanding. That means they end up in hell without repenting. Jesus said repent or perish. He condemned entire towns like Galilee for failing to repent and he said it will be easier for Sodom and Gomorrah in/on the day of judgment for such towns. God tells us Nations that forget him are turned into hell. The heart of man is abundantly wicked and who could know it. This is why Jesus told Nicodemus the Jewish Pharisee that believed in him that a man must be born again or in no likewise way will he ever see his kingdom. John 3:3 This is not something that happens in the Life to come. This is the work of God.

Are you religious and lost? Do you believe in false teachings and believe they're going to deliver you to eternal life? Are you sure you are a true Christian or are you a reprobate lost with a deprived mind upholding of the works of darkness? What is the manner of your speech and what is the nature of your heart? Do you believe in your good works or Christ? Where do you put your faith & trust? Do you believe you can pray to anybody else but God?

"Bettine Symons
As far as I know, and as far as I have been taught, the answer is nowhere. Nowhere in the bible does it say that we should pray to anyone else but Yahweh, through Jesus the mediator. As for saints, whose prerogative is it to call certain people 'saints' ? That is God's prerogative alone. No on else.

It is so plain, in the bible, that God's people should have no other Gods before him (Exodus 20:3) and that we must not make any sort of image for the purpose of worshiping it, that is, to bow down before it."

In my after thoughts for a long time now the Lord has been shown me that many are perishing in that hell is very easy to gain entry. Many people end up there. Teaching your children lies like the tooth fairy or in Easter bunnies is to adhere to the lies of Satan. Teach them the truth.