What men highly esteem are an... 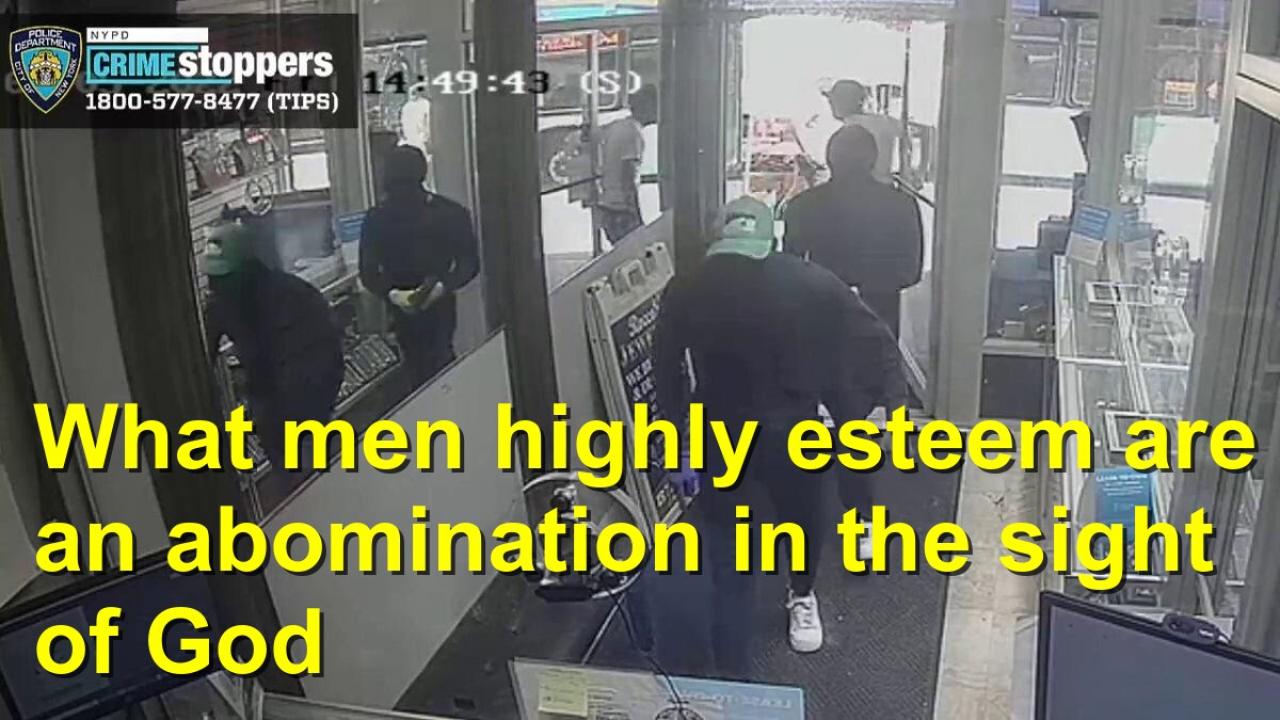 "Ye are they which justify yourselves before men; but God knoweth your hearts: for that which is highly esteemed among men, is abomination in the sight of God." --Luke 16:15.

[17] Even the Spirit of truth; whom the world cannot receive, because it seeth him not, neither knoweth him: but ye know him; for he dwelleth with you, and shall be in you.

Now I read an article of great wisdom with great understanding probably of someone that is either a true born again Christian or God gave him an amazing wisdom and he is able to spiritually discern these things and it was right on the money. I once heard a world famous rock star raise the question why we are just accumulating all these commodities. That is basically the idea why the rich man could not enter into the kingdom of God.

(He was self-seeking another interest/his own!)

Before I go on and get into what is on my heart Abraham was a rich man and yet he was not selfish. I am sure there were a few rich men that ever lived that probably turned to the true God and did God's "will" instead of their own. But it is not the norm.

There are many different parables being great lessons in God's word that can teach us and Christ himself which is divine can teach us. But one of the greatest story in scripture is the story of JOB. Some say it's just an alagori or a cliche and not a real character in life. Maybe just a parable to teach. The devil has a conversation with God and tells him JOB has a hedge of protection although you see him is the implication as a Godly Man if you take away his protection he will curse you sort of to speak and die. In fact his wife as he gets all of these plagues tells him curse God and die but JOB knows that there has to be a reason that all of this is come on to him and he never loses his faith and in the end everything is restored 10x. The faith of a mustard seed can move mountains.

We have to be careful not to condemn. Luke 6:37 to 38 It's so easy to do so. Growing up I too like most people looked at titles. I wanted to be praised and admired. But I spent a good portion of my youth chasing women going to nightclubs and spending thousands of dollars I earned in construction and at the end of the year having almost nothing. Buying expenses sports cars.  Sometimes buying expensive instruments even before I truly learned the craft. We would go to coffee shops and look at sexy women. We would go to nightclubs and dance with them and then go home and be self indulged in our own self-serving idiot praise that they liked us and gave us attention. I was shy once but one day came a time that I could approach any female/woman at any club and without fright and dance with her and sometimes even date her. Not even being the most handsome person overcame fright and sometimes young men were overwhelmed with what I was doing. This did not find me a God-fearing woman. But it did prove something that you need faith. I would take it most honorable woman will not be found in a nightclub even if she attends a nightclub a few times.

It is enmity to befriend the world. James 4:4 First you need to seek God, find God and ask and pray for wisdom if you have none. Sometimes when men belittle women or belittle their wives or vice versa you are not only destroying the relationship but you are taken away the confidence of that person which is evil in the sight of God in the first place because you are to love each other like Christ loved and gave himself for the church. My dad was harsh growing up but he was so harsh that it scared me to do evil but still I was doing evil when I was committing fornication before matrimony. Many people do this.

And the article I'm going to leave a link to is dated March 29, 1854 entitled MEN HIGHLY ESTEEM, GOD ABHORS

So I want to reiterate it is written Christ had nowhere to lay his head.

58 And Jesus said unto him, Foxes have holes, and birds of the air have nests; but the Son of man hath not where to lay his head .

So you see the Rich Young Ruler who went away sad was for a reason. Jesus didn't yell out I'm sorry come back I love you. He told him what he feared to hear. He didn't hear what he wanted to hear but he heard the truth. That for a rich man to enter into God's kingdom is next to Impossible as it's like a camel going through the eye of a needle. Yet we can't understand why it is virtually impossible to serve two masters and that's exactly what ends up happening. The Pharisees were considered whitewashed tombs. When they make proselytes they became twice the child of hell as themselves. That which men highly esteem is an abomination in the sight of God.

Then said Jesus unto his disciples, If any man will come after me, let him deny himself, and take up his cross, and follow me.

After notes: biblical Christianity that is an extension of biblical Messianic faith in Christ is Real and True. But it has been changed of course over the centuries. From how God meant it to be to what it's become is not the exact same thing. But once you become a true Christian with spiritual intuition you will understand if you care to understand what it was meant to be. It's hard to live it out in a major city that is opposed to living the way God meant to be lived but people try to do it your true Christians anyways. If you are out in the world you will see the people what is on their mind is worldly things. I'm not condemning exercise or Sports but people are obsessed with worldly things that are not of God. The other day I was out and two older women were sitting speaking. I was looking at some writing about abused animals and they were up for adoption. I hear one of the women sizing me up. She had an evil mouth full and gossip from left to right. This is the way of the world and not the way of God. And while we are to forgive such people because we too once walked in this evil UN fruitful way of life. According to the Book of Revelation which is true of course God has reserved the judgment for the whole world. In saying this I do not say this because I want to be negative. He tells us through his holy Prophets and through his only begotten son the way to life. John 10:10 but the world goes the opposite way and thinks little about the life to come not storing up Treasures for the life to come but wasting the time and storing up Wrath. You cannot serve two masters. We can get into a whole debate about what this really means. You cannot follow the world and all its fornications and all its evil Rebellion against the true God. All its false ways and serve the true God. You cannot be in Christ in the world at the same time. In fact when we do this we grieve the spirit and disobey God.

12  Yea, and all that will live godly in Christ Jesus shall suffer persecution .