Woe unto them that call evil good 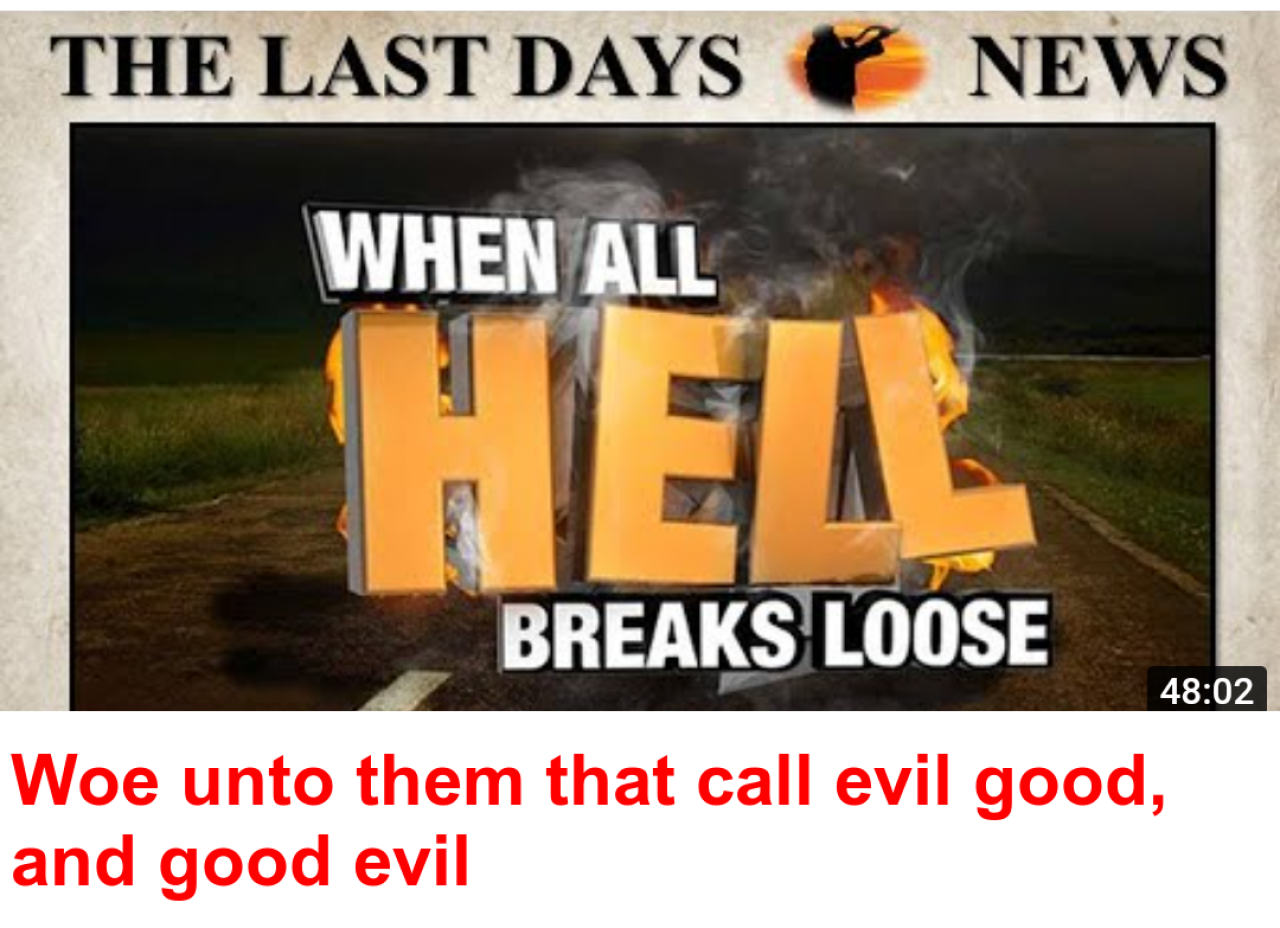 They be damned that had not a love of thy truth

It's a Godless world

Woe unto them that call evil good

I've seen and heard so many comments on people being perplexed at the evil before the world today. How people point the finger at other people but within themselves they are full of all manner of iniquity. People have been conditioned to believe lies and such people put darkness for light and lies for truth. Revelation 21:8

I've had a look around to see what's on the hearts and minds of preachers and other Christians. There is this caution by one particular street preacher who warns people saying people thought we were in the end times say 200 years ago and there was a big uproar and it didn't come to pass. I heard a historian who lost his faith and wrote various books against or denouncing the Christian faith in saying/implying that the Bible is man's own doing and not God's word yet he is in complete darkness. ( In rebuttal I read people say that he based his opinions on head knowledge and totally denied most of the facts or proof ). A lot of things were said including that Jesus thought that his kingdom would come forth in his time. You have to be careful to put words in the mouth of the Messiah.

I sometimes go around asking people questions and of course the evil one has many in his back pocket willing to bid his bidding. They don't believe the truth and they are in darkness. I remember on that same day I came across a preacher in a tent by a church building and I asked him are you the preacher here and he said yes and I had a few words with him about people's non-belief of the truth. He said they put Jesus on a cross and nailed him to it and did not believe him. In fact Jesus said they persecuted the prophets that were before you so they did not believe them either. Christ said pick up your cross and follow me or you are not worthy of me. He also said if they didn't believe me they won't believe you such people. They persecuted Christ as they did the great prophets.

So I've listed a bunch of telecasts that I had a look at and some of them had a little bit of an anointing which means there's something in it of importance to Christians. Brothers and sisters pray for the deceived.

The importance of this one was to do with faithfulness which is missing in marriages. You have people divorcing and they totally do not care about God. They care more about their deceived friends and their own deception. They don't love God but they do have a love of the world that makes t hem God's enemy. Blunt and to the point.

Interesting and there are a lot of people covering such things.

There is undeniable proof today of an ungodly world before God. A world that has accepted all manner of Abominations. Like in the day of Noah. Undeniable and real of course.

I found this interesting. He is an excellent preacher and teacher.

This has been going on for a long time. The truth is such people have influence on thousands upon thousands of young people or other people. You have to put your faith in Jesus. (Emmanuel) If you were to put your faith in such people you will lose your soul. You have to honestly choose who you will serve in your house this day as stated by Joshua.
Imagine there's a heaven & hell because both exist.

We've arrived. It's just as it is written. It's unbelievable.

When I decided to have a look at this it came up with a little bit of anointing for me which means it has something in it that is valuable to Christians. If you would like to have a look go ahead.

So what does this have to do with Christians? We wrestle not against flesh and blood and people are abundantly wicked. Today especially they call evil good and good evil. God does not judge on the same measure that humans do. It's like if a woman was raped and they blame her so lots of them are scared to come forward. But then amongst them you have the ones that are liars. And they tarnish people. But on the day of judgment there will be no hiding as every deed will be answered for what was done in the body good or bad. Lots of people are racist but they just hide it. Then you have other people that are blamed for being racist and don't have a racist bone in their body. This is something that has to do with a wicked deceitful heart. I don't usually go around thinking like that. I see the diversity in different races and that's how God designed it. Even different tongues, different languages. And then when you have all these media organizations I guess things can get spun and perhaps the story gets twisted especially for somebody's in the limelight, a celebrity things could get pretty weird. Kind of like all those stories we heard about with the Beatles and Yoko. I remember Yoko sat on an amp and Paul said their going  to say the Beatles broke up because Yoko sat on an amp.

Dear brothers and sisters can you please pray for these preachers and their Church.

God's word says he who tries to save his life will lose it and he who loses it for my cause will preserve it for all of eternity. Matthew 16:25 God's word says the martyrs of Jesus did not love their own lives to the death. Revelation 12:11 I've heard a brother street preacher saying they deserve the head seat at the table in heaven. I agree.

Will there be a global reset? Will a new world order emerge e ven in our time. I am astonished to see the human Freedom Index. Look what is written " fully 83 percent of the global population lives in jurisdictions that have seen a fall in human freedom since 2008 ." Now look at this " Only 17 percent of the global population lives in countries that have seen increases in freedom over the same time period. " With what has been before the world in the last couple years has proved that people could lose their rights and Freedoms easily. The evidence of what has been mentioned in this paragraph is astounding and cannot be denied. So yes God's word is truth. It cannot be broken.

You know they have a saying the apple doesn't fall far from the tree. That's right and that is so true. Many deceived people are exactly like one of their parents. Birds of a feather flock together. That is the other saying which is true of course. You see it was written that in the end times people would not listen to sound doctrine and it's perfectly truth. 2 Timothy 4:3 We can say some of these people have their brains raped. You know a lot of people died over the centuries preaching the truth and bearing their cross to such people.  I read about all the apostles and how they died. Not one of them died using a weapon. Perhaps only one of them could be debated that died of natural causes. That is the perplexity of people believing the truth. 1:44 a.m. same day.

What I'm shown quite often is that they have made the house of God into a den of thieves. It cannot be denied and what that shows you is that what we are up against is that Wicked. God is not mocked though. I have read about and seen that people have lost their YouTube channels and even their rights & freedoms. What we witnessed in the world is a fight against the truth in every way possible. 2:44 a.m. same day