I like to encourage all believers to watch my video, called Are You A Saved Or An Unsaved Believer? and to examine themselves to see if they are in the faith. 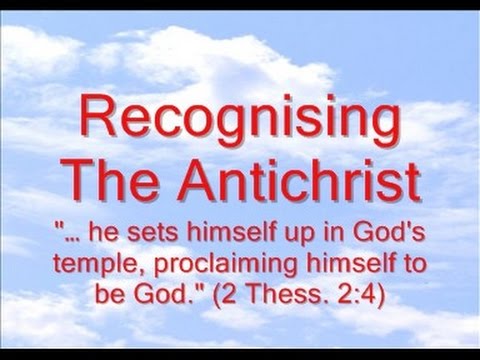 You are entitled to your opinion but I would like you to consider an alternative view, actually it's been the orthodox view of Protestants for centuries. It's not politically correct to teach it in this age of false ecumenism, but it must be taught since it is Bible truth.

You are presenting the futurist interpretation of prophecy fathered by the Jesuit Francisco Ribera around 1590. It is a counter-reformation deception soundly rejected by Protestants for over 400 years, but was adopted by dispensationalists through Darby in recent times.

It is considered the most dangerous and blinding of modern day heresies because it allows the anti-Christ system to operate virtually unopposed. A theological " smokescreen " if you will, designed by the Papacy to shield itself from detection and prosecution for it's crimes.

The orthodox Protestant interpretation is called historicism and sees these prophecies quite differently. The anti-Christ in not a single individual in the future, and prophecies span Bible times to the present, not all crammed into the future. The tribulation spans the siege of Jerusalem in AD 70, the persecutions under Pagan Rome, then Papal Rome when the Papacy martyred Christians by the millions, right down to horrors and corruption making headlines today.

A Great Cloud of Witnesses: "Wycliffe, Tyndale, Luther, Calvin, Cranmer,  Bunyan, the translators of the King James Bible and the men who published the Westminster and Baptist confessions of Faith; Sir Isaac Newton, Wesley, Whitfield, Jonathan Edwards; and more recently Spurgeon, Bishop J.C. Ryle and Dr. Martin Lloyd-Jones; these men among countless others, all saw the office of the Papacy as the antichrist ." Taken from All Roads Lead to Rome, by Michael de Semlyen. Dorchestor House Publications, p. 205. 1991.

" Every Reformer , without exception, spoke of the papacy as Antichrist " - R. Allen Anderson, Unfolding the Revelation, p.137

“In all ages of the Church, from the days of Gregory the Great down to the present, men have pointed to the Papacy as the fulfilment of the prophecy . That interpretation is set forth in the Homilies of the Church of England and by all the Reformed Churches. Dr. Charles H. H. Wright  - “Daniel and His Prophecies,” p. 168. London: 1906.

For the real truth about the anti-Christ system, I highly recommend you study the historicist interpretation of prophecy and read this article . I say this with love for the people trapped within the false religious system God warned us about, and blinded by her false doctrines.

In love, God is calling people out of this mammoth system of sin and deception before he destroys it... I believe that will not be far off...

Revelation 18:4 And I heard another voice from heaven, saying, Come out of her, my people, that
ye be not partakers of her sins, and that ye receive not of her plagues.