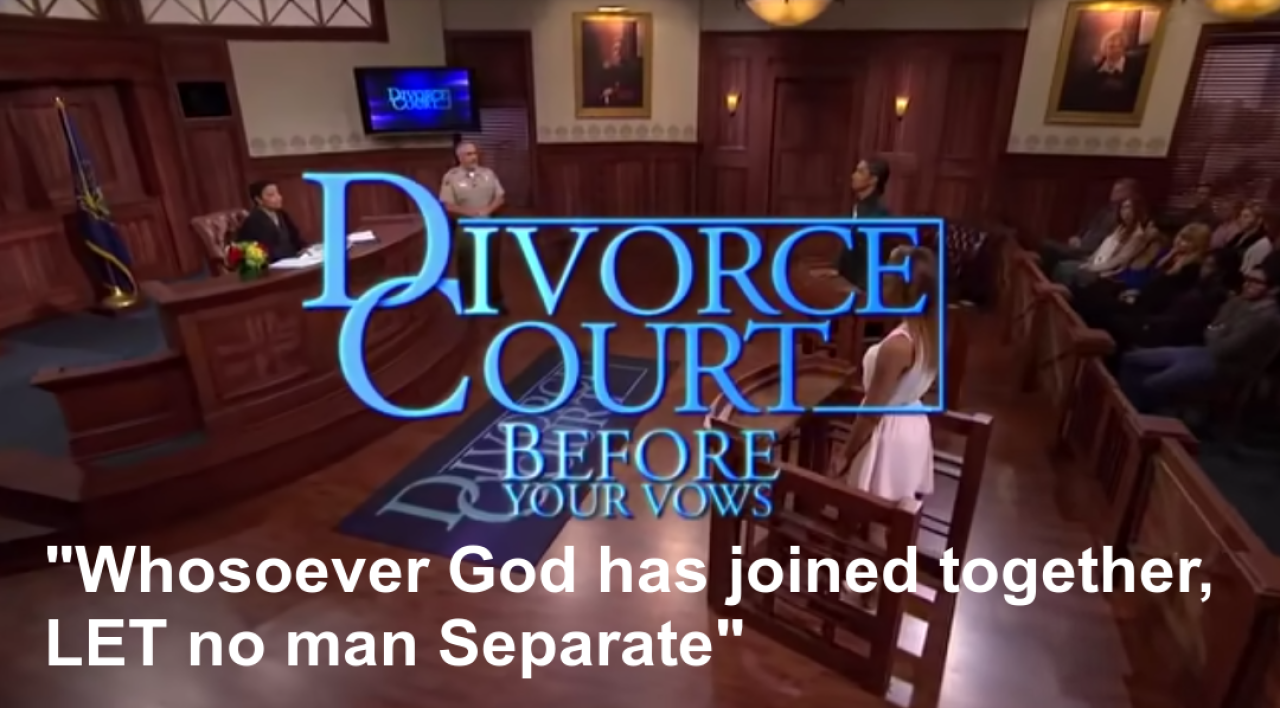 It must really grieve God's heart when people disobey him and destroy the union of a family. We should know and comprehend the devil absolutely loves this. You can't serve two masters.

The lord Jesus taught that divorce is Not God’s plan. True marriage comes from God so the couple becomes one flesh. Ephesians 5:31 If anybody tries to separate that marriage they are committing an evil abominable Act including the two parties from that marriage if they indulge in such unwarranted sin. God would have it that they reconcile. That they rekindle the relationship. Because it is to have a relationship to be part of God. A born-again Christian is said to be in Christ. Not in the world. You can't serve two masters. A court may rule against marriage but in fact they are ruling against the creator of Heaven and Earth and his design. You can't have it both ways. I spoke with a woman who is from one of these court administrations and she said "well if you can't be happy together you'll be happy apart". That's not God's design nor is it God's plan. A lawyer working to separate the two/couple is working against God's plan and design even if he or she were hired.

You know when you say your marriage vows that is very important. If you look around there are videos of men that found out that their partner was cheating  just prior to saying their vows they made it known what they knew. This is the only ground according to God that gives us the right to separate or to put it off. There are other grounds but the majority of weight is on fornication. Look what the Bible says about "Until Death Do Us Part."

2 For the woman which hath an husband is bound by the law to her husband so long as he liveth; but if the husband be dead, she is loosed from the law of her husband.

So in research this is what I found.

This Woman's insight was interesting and she mentioned where Jesus said certain heavenly things were only revealed to babes and not to the wise and prudent.

If you examine that passage it is extremely interesting. I take this out of that passage. "22 But I say unto you , It shall be more tolerable for Tyre and Sidon at the day of judgment, than for you ." He's talking about repenting which means turning from that way of sin. I would take it marriages that totally disobey God and men pull apart they will give an account for on the day of judgment. People disobey God. If you are in a marriage and you are looking at other people in your marriage you are committing evil. You know I heard a preacher preach about how Christ made an open display of the principalities of evil. He did not die in vain on the cross. There will be a judgment. And particularly people when we stray with our eyes we do evil in the sight of the lord. Jesus said just by looking at a woman with lust you've already committed adultery with him/her in your heart. Matthew 5:28 Marriage is a union and God is involved. Although it must be said that some people do not know God but they only know him in lip service.

6 Wherefore they are no more twain, but one flesh. What therefore God hath joined together, let not man put asunder.

In my conclusion people are indulged in fornication. Even separated husbands and wives who do such things are doing evil. See the Bible says she will be called an adulterous if she separated from her husband and doing such things as marrying somebody else. Until he no longer exists on Earth she is sinning against the God who created her & everything. Same with him. So that brings me to another thought, are marriage vows biblical?

Are marriage vows from the Bible?

"Traditional wedding vows are not in the Bible, but they are based on biblical principles. Using these principles, you can either tweak the traditional vows to fit your union or write your own completely unique wedding vows. Marriage, according to Genesis 2:24 , is two becoming one." Jul 22, 2021

What does “what God has joined together, let no one separate” mean? | GotQuestions.org - YouTube

What does “what God has joined together, let no one separate” mean?